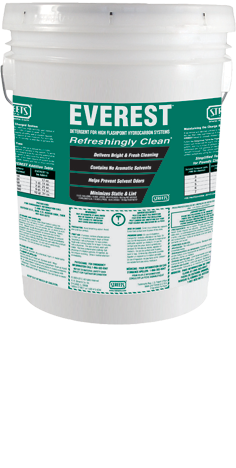 Effective moisture management, reducing the formation of unpleasant solvent odors, minimizing lint and static, and controlling redeposition are some of the challenges EVEREST will overcome to deliver consistently clean, fresh and bright garments.

EVEREST has been formulated for use in dry-to-dry hydrocarbon machines and can be used with any brand of high flash point hydrocarbon solvent. So bring your cleaning quality to new heights by making EVEREST part of your hydrocarbon cleaning process.

Formulated to Control Solvent Odors
A buildup of bacteria in your drycleaning system can cause unpleasant solvent and garment odors. Bacteria lives and breeds in free moisture and feeds on the hydrocarbon solvent and impurities contained in it. EVEREST controls free moisture, thus eliminating the breeding ground for odor causing bacteria.

Helps Eliminate Static Cling
Few things are more frustrating than garments clinging together when unloading the wheel. When used as directed, EVEREST helps eliminate static generated in the wheel, so garments come out static-free. Clothes are easier to handle when pressed, and customers appreciate the absence of static cling.

Reduces Lint Formation Everywhere the Garment Goes
Where there is static, there is lint. By eliminating static, garments are less likely to attract lint in the wheel or when moving through the plant. As a result, you’ll save time and labor in manual lint removal, and your customers will enjoy garments that resist attracting lint.

Does Not Lower Solvent Flash Point
EVEREST’s flash point is over 200 degrees Fahrenheit, well beyond that of high flash point solvents used for drycleaning.

WE LOOK FORWARD TO HEARING FROM YOU!

We use cookies to offer a better browsing experience and to analyze site traffic, Read about how we use cookies. Accept
Go to Top